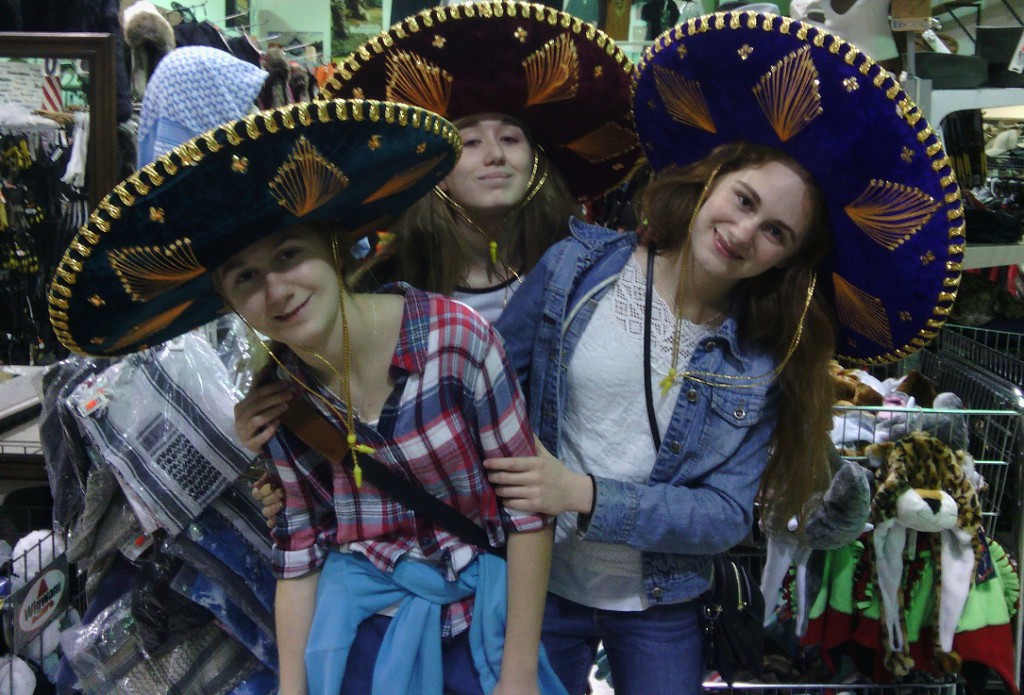 jane, sara, and marylynn are my nieces. they stayed w/us for a few days after christmas, and wanted to experience as much of KC as possible. the pic above was taken at mickey’s surplus an hour before i had to drive them back home. in the span of four days and nights their adventures included:
-walking through the plaza lights
-ice skating for 3 hours straight
-riding the KC streetcar
-eating Insomnia Cookies
-laser tag, go karts, and multi-player pac man @ Power Play
-watching all 8 episodes of Stranger Things on netflix
-burgers and fries @ Fritz’ Railroad restaurant
i’m sure there are things i’ve left out. 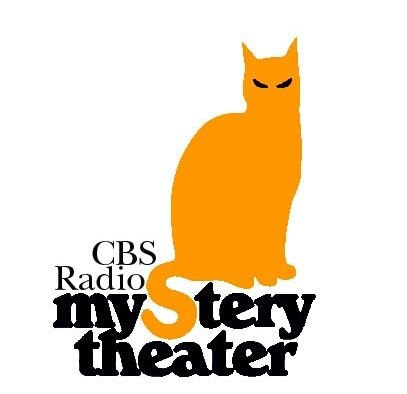 one day last week i found an old show online that my sister and i used to listen to: CBS radio mystery theater! we discovered it in the mid 1970′s when our TV stopped working. there was an ad for a new “radio drama” on the back of the cereal box. we knew that our grandparents used to listen to these type of shows before TV was around, but we had never heard one before. this is the opening to one of the shows we both remember about a white wolf. 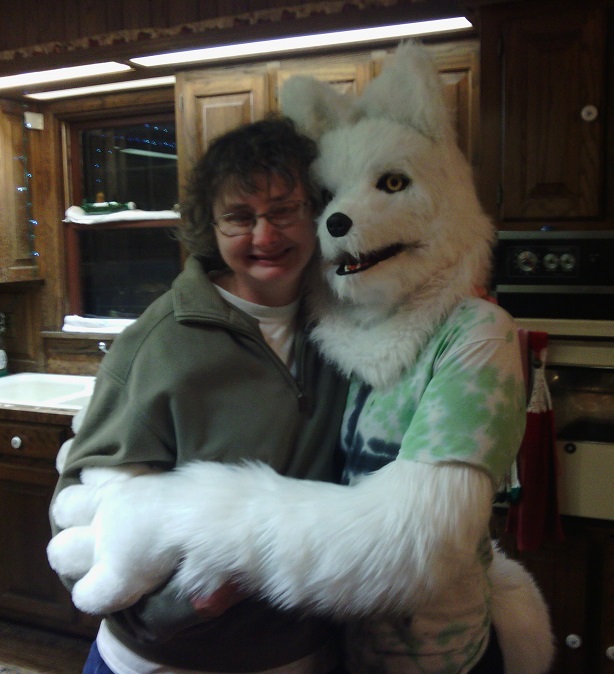 i downloaded 1,399 CBS radio mystery theater shows and put 100 of them on an mp3 player as a christmas present for my sister. the pic above is jenny with our niece sara in her wolf costume that she tailored.

Rockin’ Around The Festivus Pole 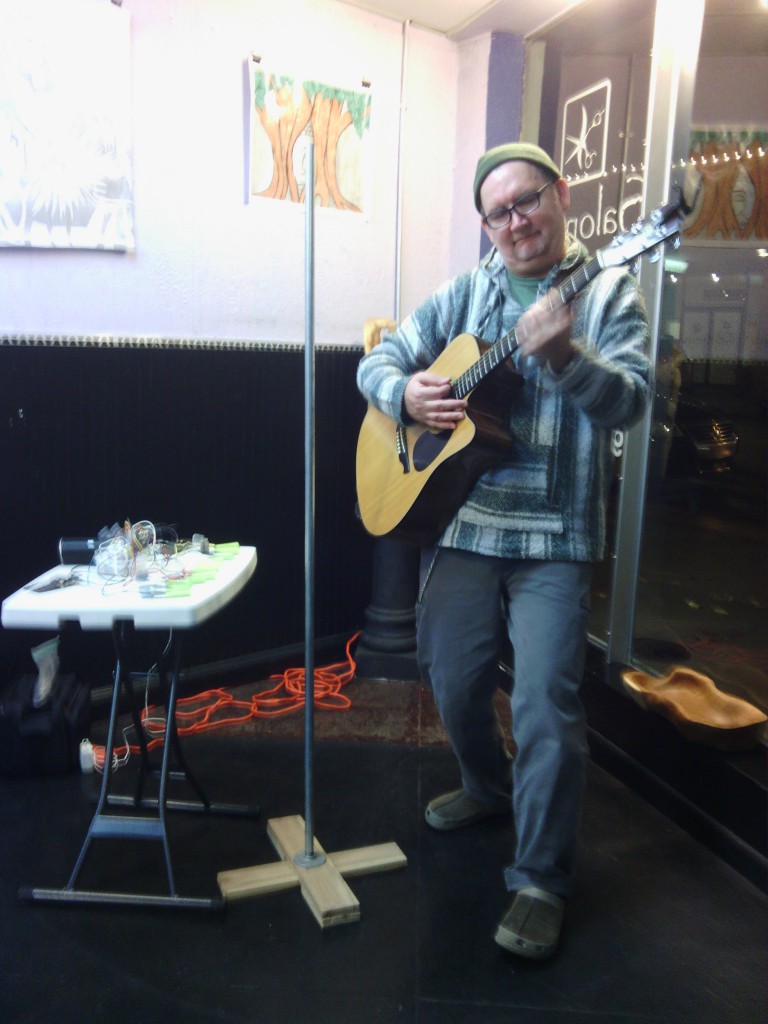 last friday it was cold, pedestrian traffic trickled, but i still brought the beeps to salon kitch. if i you think there was a small crowd that night… you’re right, it was just me and kitch. but that didn’t stop us from throwing caution to the wind, and jamming around the festivus pole!
“rockin’ around the festivus pole instead of a christmas tree,
later we’ll air some grievances
then we’ll boast our feats of strength!”
–sung to the tune of rockin’ around the christmas tree 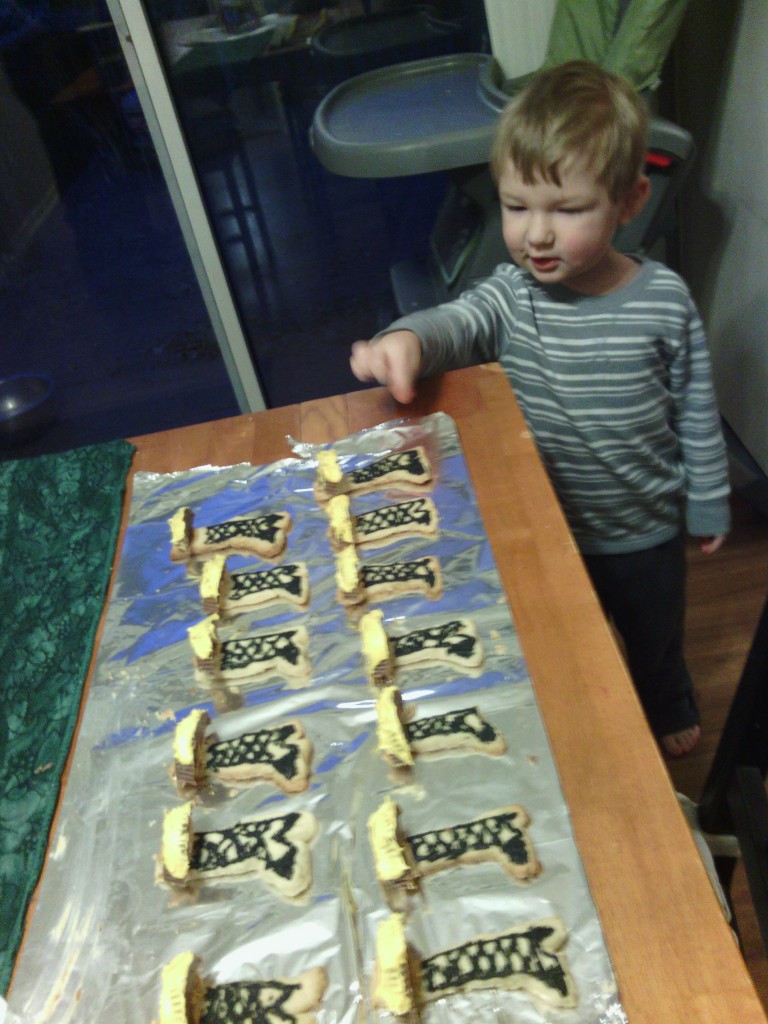 we watched a christmas story with the frierdichs and janouscheks again this year! the first time i saw it was at the eastgate cinema in joplin. it was 1983, and i was a teenager. watching this movie is now an annual tradition that jenny & i have kept with two families since christy was a teenager (she’s one of the frierdich’s). these days she’s a mama that knows how to bake leg lamp cookies, and her son ben knows how to eat them… well… the top part anyway. 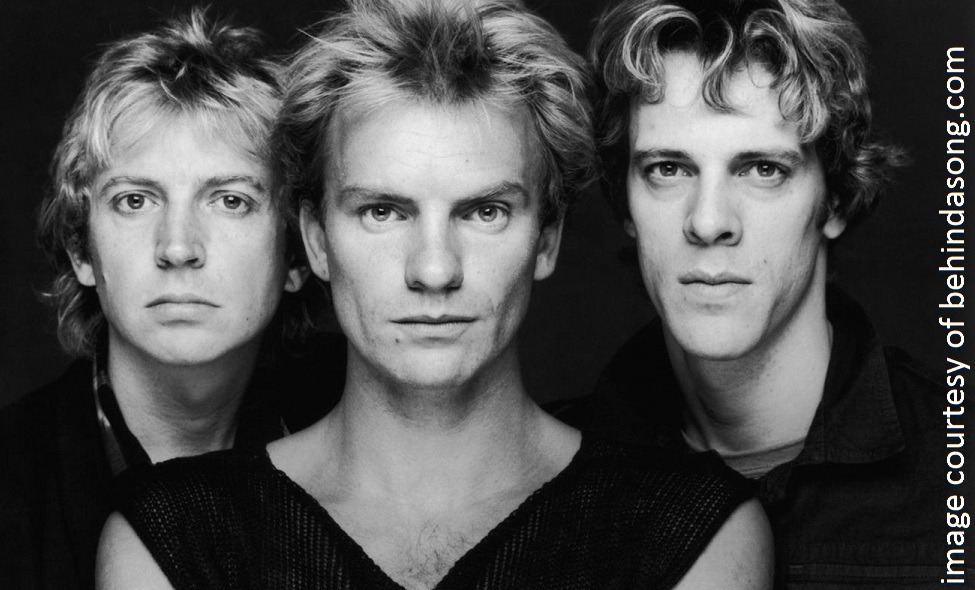 i just found a show called crap from the past. ron “boogiemonster” gerber has been hosting it every friday night since 1992! for the last 24 years he’s been playing really cool music, and really weird music. this track is a cool song by the police that gets weird in a hurry. 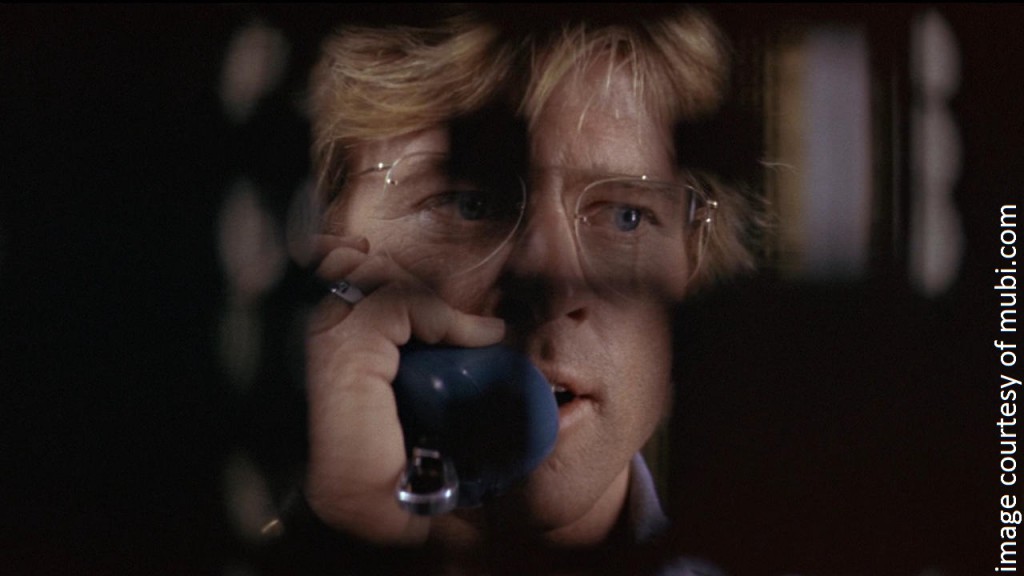 ok, ok… we’re not playing cat and mouse with the CIA like robert redford in three days of the condor– but we ARE playing small veggies in a single bound in three days! beep goes the weasel will start at 6pm this friday (12/16), at salon kitch located at 7333 W 80th. we’ll be inside next to the art of sandeep shinde! 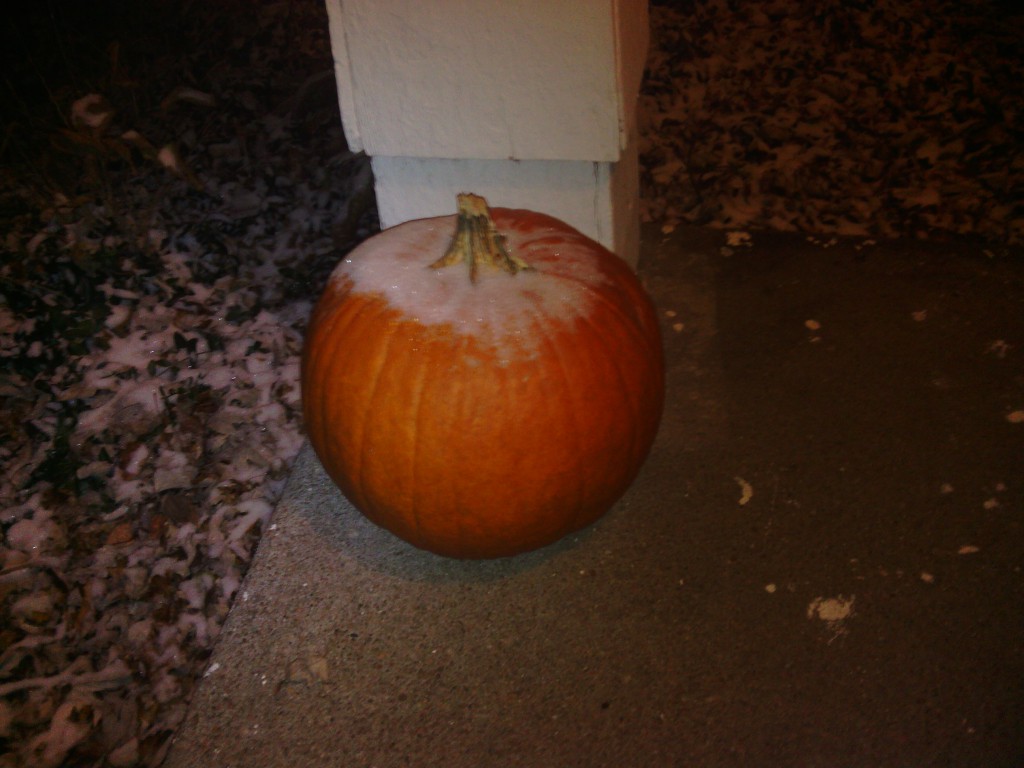 there was only a 20% chance of snow today, but we still got a dusting this afternoon. when i saw what was left on the pumpkin, it reminded me of an old country song. you know the one. hey if the smothers brothers could convince their audience that orange rhymed with door hinge, then cal smith probably figured he could do the same thing with bumpkin and pumpkin, right? 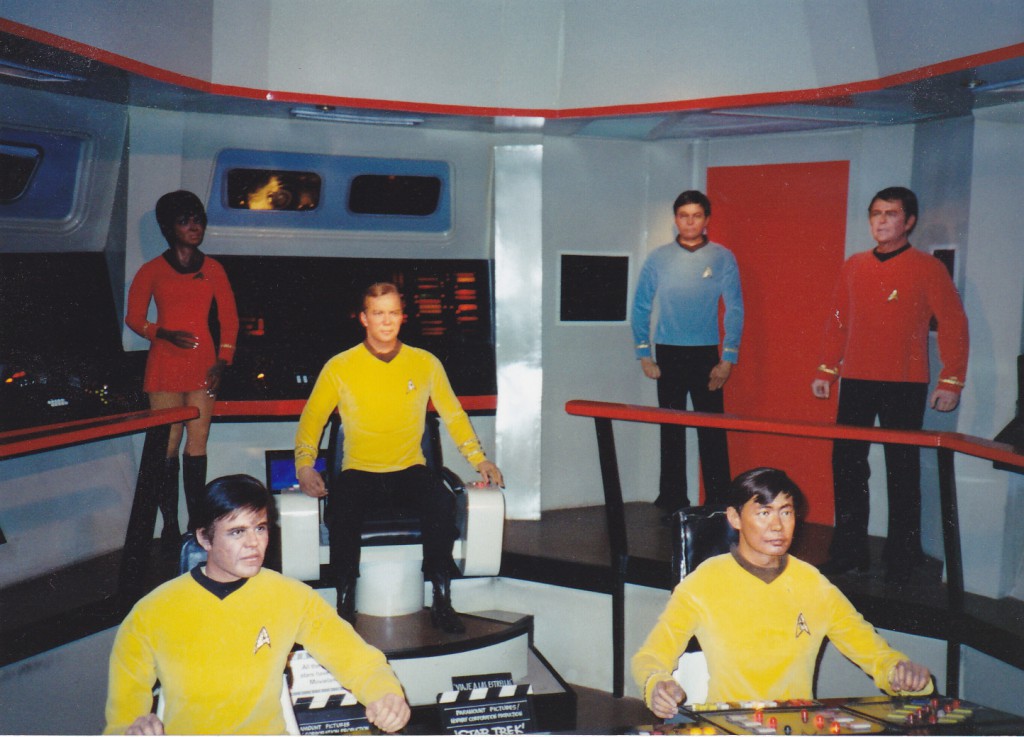 during our last visit to jenny’s hometown, my sister-in-law, diane showed me this star trek photo with wax figures that she found in her parent’s home. when i asked her where they acquired it, she didn’t know. i did a quick search online and found out that this is a picture from the movieland wax museum in buena park, CA. according to wikipedia it operated from 1962-2005. the museum was just torn down in october 2016. however, the wax figures of uhura, kirk, bones, scotty, chekov, sulu, and spock were sold to 3 people (see below) who paid $40,000. 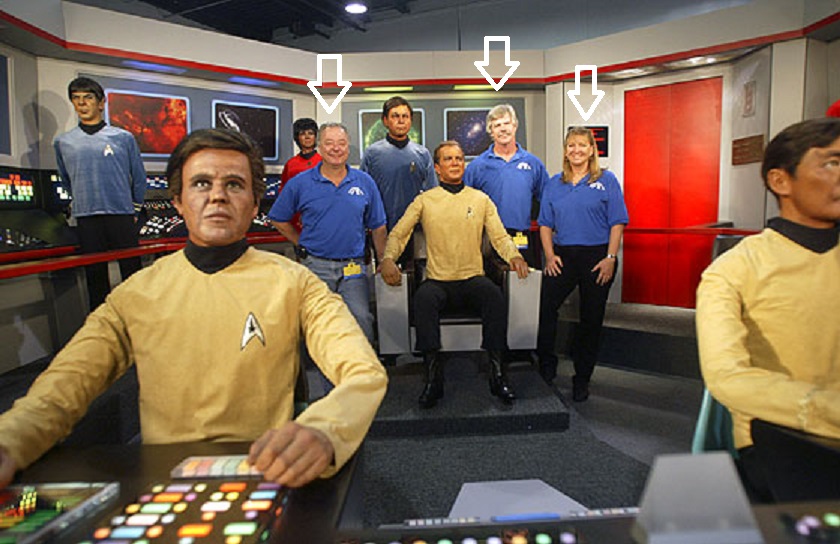 so THAT mystery was solved, but it opens up another one: diane’s parents never went to california, and they never claimed to be trekkies. so now she’s left to wonder how did bob and thelma actually get that first photo?

We’re In For The Night 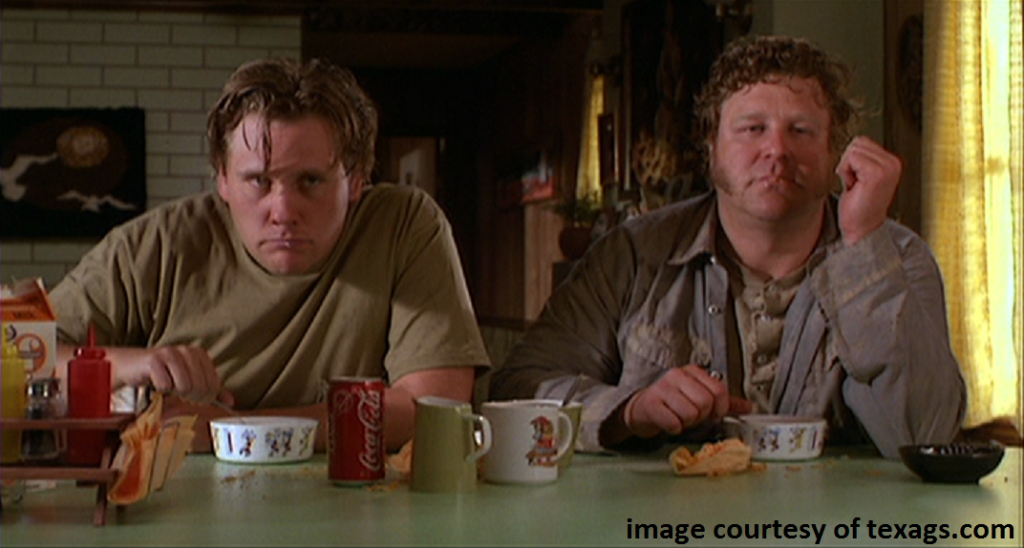 earlier today i realized it was the first friday of the month. that means that a lot of people are walking around the crossroads art district despite the cold. i used to be one of them– but staying home tonight just seems more appealing. i can tell people i’m saving up my energy for dec. 16. that’s when i’m scheduled to join an underground artist from india, and beep @ salon kitch.